Legazpi For A Day

Since my 1-day affair with Bohol was successful, I’ve decided to do the same with Legazpi, Albay.
I left Manila on November 22, 2010 at 9:10 in the morning and arrived Legazpi at 9:55 AM (15 minutes ahead of schedule.)
I only had 3 hours to go around Legazpi before heading back to Manila again.
I went straight to the tricycle area and asked around for the rates going to Cagsawa Ruins.
Luckily, it was cheaper than the one I had in Bohol 🙂
Going to Cagsawa Ruins would be Php 150 and the trike driver offered me the same price going back.
Once settled with the price, I also asked him to take me anywhere else he thinks is nice in Legazpi since this was my first time to visit Bicol.
First stop: LIGÑON HILL
This was a good 5-10 minute ride away from the airport.

Tricycles cannot climb up the hill as it was very steep but Habal-habals (motorcycles) are readily available.
Ride going up: Php 20 (same rate going down) so that’s a total of Php 40
Entrance fee to Lignon Hill: Php 20 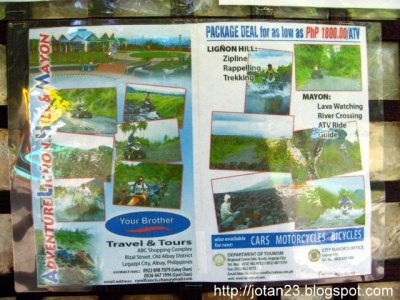 Package deals are also offered such as riding the ATV going to the Lava Stones.
That’s KUYA JUN on the motorcycle. You may contact him through his mobile number (+63-999-308-4669) if you need a tour guide in Legazpi.
The view on top was breathtaking! 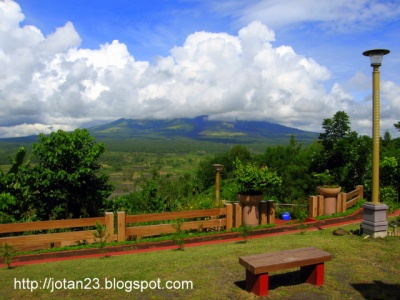 You may also zipline or rappel while you enjoy the scenic view of Legazpi, Albay. 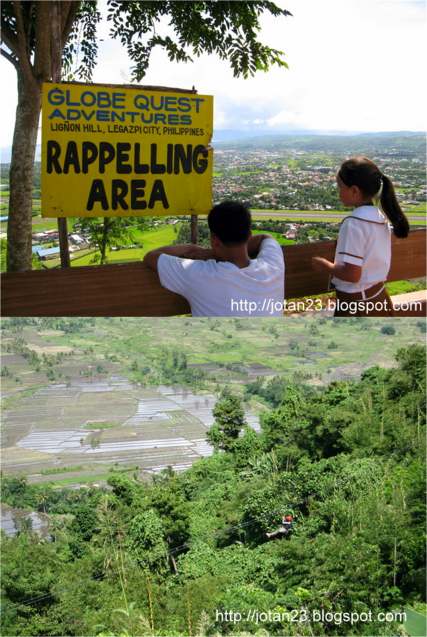 Lignon Hill is the perfect spot to unwind, relax and get a great shot of Mayon Volcano.
FYI, Chowking opened a branch here so you may have breakfast or lunch with a great view as you wish. 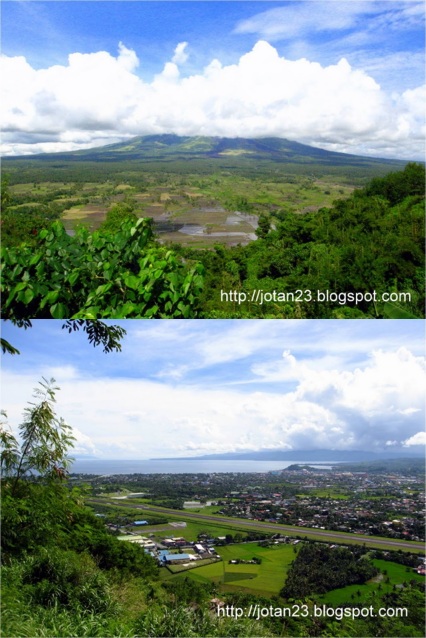 From the top, aside from the Mayon Volcano, you may also sight the Legazpi Airport.
Next stop:  CAGSAWA RUINS 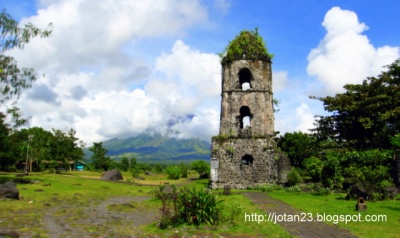 “In February 1, 1814, Mt. Mayon began its most violent and deadly eruption to date. During the eruption, some 1,200 people took refuge in the stone church of Cagsawa. Unfortunately, all perished when lahar and pyroclastic flows engulfed the church. Only the belfry of the Cagsawa church remains as a grim and silent reminder of that fateful day. For almost two hundred years, it has withstood the test of time and the elements to become one of the most recognizable landmarks of Albay Province.”  – Wow Legazpi

Entrance Fee: Php 10
Locals are there to serve as your photographers. They have been doing this for years. They will ask you to pose and take your pictures using your camera.
Just be careful with the kids because they will try to get your camera from your hand and it might fall. This was what happened to a tourist and the camera lens broke 😦 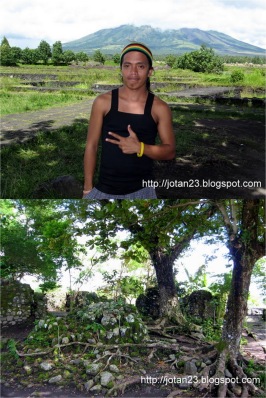 That’s Kuya EDWARD. He is a regular “photographer” in Cagsawa :p
He also serves as a tour guide if you want to go around Legazpi, Albay. (same as Kuya Jun, pictured earlier with the motorcycle)
Kuya EDWARD’s number is +63-919-957-0130
These were just a few of the silly shots he made me do: 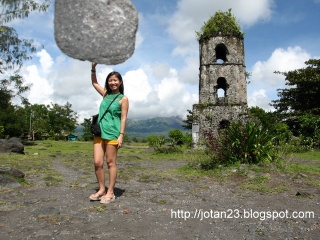 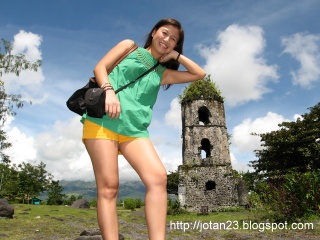 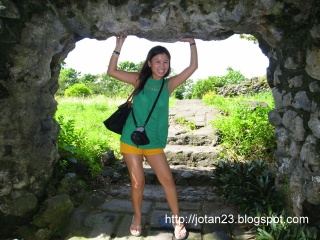 A gratuity tip would be very much appreciated by the locals but no certain amount is expected.
Php 20 should be, at least, the minimum.
Next Stop: DARAGA CHURCH
“The church of Daraga, Albay is dedicated to their patroness Our Lady of the Gates. The church stands on top of a hill which gives you a commanding view of the Bicolandia’s most famous attraction: The Mayon Volcano.
The church was built in 1773 by the Franciscan missionaries after the original church was buried Cagsawa after a massive volcanic eruption. This Baroque architectural masterpiece features religious carvings in its facade.” – Byahilo

It was very hard to get a full view of the volcano because of the clouds.
Locals said that the Mayon Volcano view is usually clear from 6AM to 8AM.
Fortunately, I got to take a glimpse of it.. 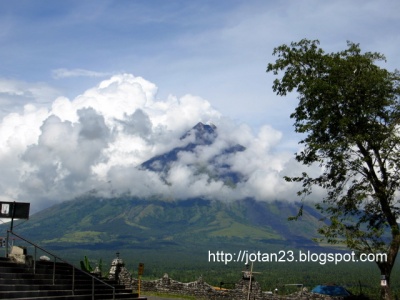 It was truly mesmerizing to see the peak of Mayon Volcano!
I’ll be back next year!!!
LAST STOP: SIBID SIBID Restaurant
Peñaranda Extension, Bonot, Legazpi City.
(Tel Num: 480-3030)
Located across WAWAY’s, this fairly new restaurant had already captured the regulars of WAWAY’s.
This was where my trike driver and I had our lunch 🙂
We ordered what Kuya Jun recommended: Pinangat and Bicol Express
Spicy Pinangat (Php 70) – spicy laing. This was good but I wish it was more spicy. 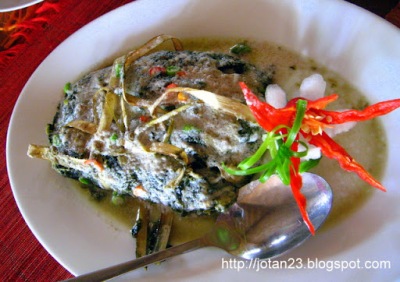 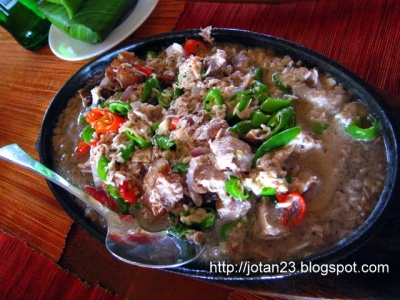 I was expecting this to be really spicy but to my surprise, it was not that spicy because they did not use Siling Labuyo =/
It was already 12:45 PM when we finished our lunch, just in time to head back to the airport. 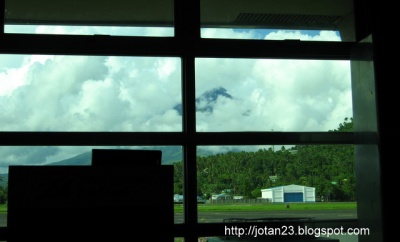 Wow!!! What a wonderful surprise!
You can still see Mayon Volcano while waiting for the plane to arrive!!!
I hope that the new Legazpi International Airport would still have the same magnificent view as this 🙂

15 thoughts on “Legazpi For A Day”