6D/5N Bicol Itinerary – Day Five/Six – Other Things to do in Legazpi City, Albay

6D/5N Bicol Itinerary – Day Five/Six – Other Things to do in Legazpi City, Albay
Day 5 was our LEGAZPI CITY, ALBAY TOUR DAY (Php 3,500 – Louwil Arellano)
7:00 AM – Breakfast at HOTEL ST. ELLIS
Our first activity should have been the ATV TOUR to MAYON LAVA WATCH. Unfortunately, the weather was pretty bad. It was pouring cats and dogs 😦
TIP: You may go to LIGNON HILL to reserve ATVs and schedule your tour.
They have changed the rates recently but you may try negotiating to their previous rates, which was Php 1,800 per ATV (2 pax per ATV). Now, it’s already Php 1,800 per person per ATV.
We went ahead to TABACO CITY, which is the most accessible way to reach MAYON VOLCANO. This is also where the MAYON PLANETARIUM is.
(Along the way, you will see wooden crosses on the road, representing the 13 Stations of the Cross) 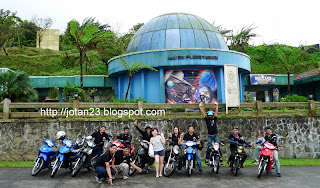 It is the perfect venue for those who wanted to enjoy a closer look at the volcano since it is more than halfway up the peak itself. But then again, due to the fog, we were not able to catch a glimpse of it.
FYI: TABACO CITY: Where it got its name: “One of the many versions on how this city got her name is the Legend of Pagkamoot, which tells about a woman who was well-loved by her people because she was their healer, prophetess and servant. She was called Pagkamoot, meaning Love. One day, a Spanish vessel arrived asking about the place’s name. A middle-aged man, some say, the healer’s father, feared that his daughter would be taken captive by the foreigners, shouted at the top of his voice, “Tabak ko! Tabak ko!,” which means, “My bolo! My bolo!.” The Spaniards thought their question was answered and went their way believing that the place they had just left was called Tabaco.” – from an Albay Tourist Flyer
Next stop: ST. JOHN THE BAPTIST PARISH CHURCH (also in Tabaco City) 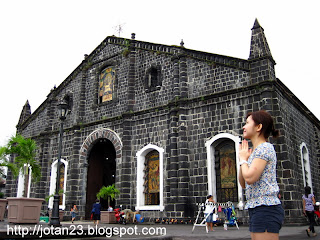 FYI: This temple of faith was built in 1864, with hand-hewn stones glued with hay, molasses and egg yolks. 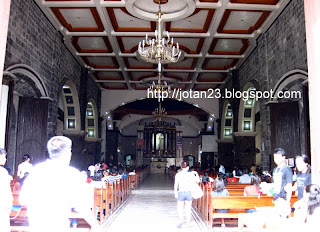 FYI: Tabaco City is well-known for their handcrafted bolos, scissors and other knives.
Next stop: PUTSAN POTTERY FACTORY
When we got here, it was CLOSED (it was a Sunday.) That sucked because we wanted to try making our own mini clay pots.
To make up for our disappointment, LOUWIL ARELLANO (our Bicol Tour Guide) brought us to the most famous halo-halo in Bicol, DJC HALO-HALO 🙂 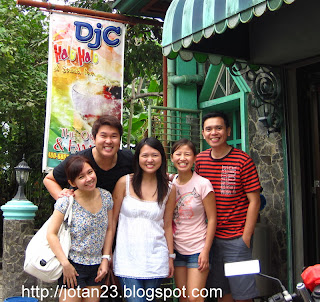 WOW!!!! Now we know why this is called the BEST HALO-HALO in BICOL!!!
After our snack break, we went to BUSAN FALLS (Php 10 per person) 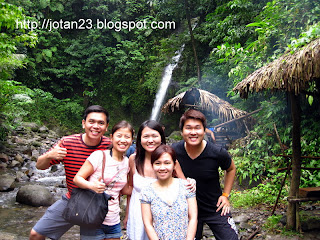 It was still raining a bit when we got there. Also, there were plenty of drunks in the area so Louwil advised us not to go any further. We just took a picture and left.
We also went to HOYOP-HOYOPAN CAVE but since it was still raining, the group decided that  it would be best to go back and buy pasalubongs instead.
Louwil brought us to the first pilinut candy maker in Bicol: ALBAY PILINUT CANDY 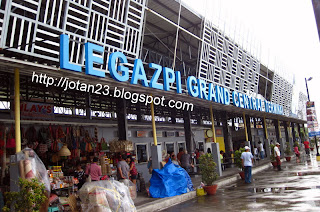 They sell all kinds of goods: from food to slippers 🙂

Items here are cheaper for sure 🙂
Abaca slippers are Php 20 a pair (on the average)
LAST STOP: EMBARCADERO 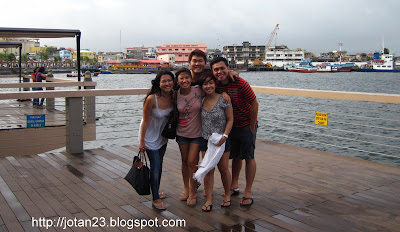 This is the latest and coolest hang-out place in Legazpi City 🙂
DINNER: Hotel St. Ellis 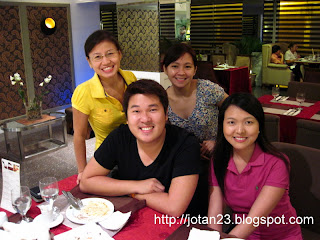 Food in Hotel St. Ellis was SUPERB!!!
The next day, we were served ANGUS BEEF TAPA for breakfast (YUMMY) and then headed to the Legazpi Airport to go back to Manila.
Bicol was awesome!
We’ll definitely come back again someday!

4 thoughts on “6D/5N Bicol Itinerary – Day Five/Six – Other Things to do in Legazpi City, Albay”